A few weeks ago, I had a customer ask me about creating a custom vROPs dashboard for them, so that they could monitor the health of the clusters. For those of you who were unaware, VMware has packaged vROPs with a widget called “DRS Cluster Settings”, that does something similar, and look like this:

The idea behind this widget, is that it will list all clusters attached to the vCenter, giving you high level information such as the DRS setting, and the memory and CPU workload of the cluster. With a cluster selected, in the lower window you will see all of the ESXi hosts apart of that cluster, with their CPU and memory workloads as well. If you are interested in this widget, it can be added when creating a new custom dashboard, and you will find it at the bottom of the available widget list.

While this widget gave me some high level detail, it wasn’t exactly what I wanted, so I decided to create my own to give a deeper level of detail. I used the widget above as a template, and went from there.

Much like the widget mentioned above, by selecting a cluster in the upper left side, in the lower left side there is a box that will populate with all hosts attached to that cluster. Once a host is selected, in the lower right box, we also get a memory and CPU workload for the past 24hrs for the selected host. This dashboard is slightly larger than a page will allow, so unfortunately users would need to scroll down to see all of the data, but I believe it gives an outstanding birds-eye view of the clusters DRS capabilities.

In my next blog post, I’ll break down what’s involved in creating this dashboard. 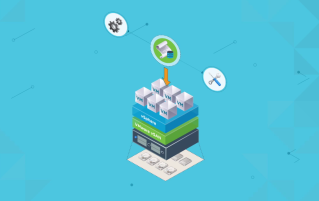 Looking to test-drive vSAN? Get started with this 30 minute intro hands-on lab to learn about deduplication and compression, RAID 5/6 erasure encoding and more.

The very long over due followup post to my The Home Lab entry made earlier this year.  I did recently purchase another 64GB (2x 32GB) Diamond Black DDR4 memory to bring my server up to 128GB.  I had some old 1TB spinning disks I installed in the box for some extra storage as well, although I will phase them out with more SSDs in the future.  So as a recap, this is my setup now:

Initially when I built the lab, I decided to use VMware workstation, but I recently just rebuilt it, installing ESXi 6.7 as the base.  Largely for better performance and reliability.  For the time being this will be a single host environment, but keeping with the versioning, vCSA and vROps are 6.7 as well.  Can an HTML 5 interface be sexy?  This has come a long way from the flash client days.

I decided against fully configuring this host as a single vSAN node, just so that I can have the extra disk.  However, when I do decide to purchase more hardware and build a second or third box, this setup will allow me to grow my environment, and reconfigure it for vSAN use.  Although I am tempted to ingest the SSDs into my NAS, carve out datastores from it and not use vSAN, at least for the base storage.

Networking is flat for now, so there’s nothing really to show here.  As I expand and add a second host, I will be looking at some networking hardware, and have my lab in it’s own isolated space.

Now that I am in the professional services space, working with VMware customers, I needed a lab that was more production. I’m still building out the lab so I’ll have more content to come.